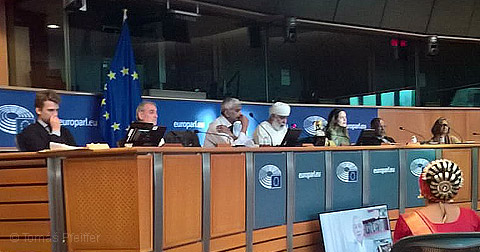 Delayed by Brexit, on 28th January 2020, All Party Parliamentary Group (APPG) – Indian Traditional Sciences hosted Ayurveda Day 2019 colloquium supported by Geoffrey Van Orden CBE MEP and Her Excellency the Ambassador of India to the Belgium, Luxembourg and the European Union Ms Gaitri Issar Kumar in the European Parliament at Brussels. Geoffrey very warmly welcomed all the guests and congratulated the APPG Indian Traditional Sciences and its Secretariat Amarjeet S Bhamra to hold this historical colloquium, since its inception by Prime Minister of India Narendra Modi, continuously in the EU Parliament. Ambassador Kumar was equally impressed by the dedication of Mr Bhamra and the British Parliamentarians group to raise the profile of powerful medicine systems of Ayurveda and Yoga in the European Parliament and assured her support to further develop the focus of the APPG Indian Traditional Sciences into the EU.

Amarjeet S Bhamra spoke passionately on the support, which the APPG Indian Traditional Sciences has received over the years for hosting Ayurveda and Yoga colloquiums particularly from the above chief guests and was sad to see the British parliamentarians leave as Britain exists the EU, as they have rendered un-stinting support for the incorporation of Indian Traditional Sciences into the health of the European nations. He proposed the creation of Ayurveda Centre of Excellence for Research, Education and Practical Application in continental Europe. Together with Prof Madan Thangavelu, he handed a statement of intent between the EU and India to all chief guests. Amarjeet S Bhamra also took the privilege to thank Ambassador Kumar and all her staff at the Indian Embassy in Brussels for their support and providing vegan buffet and fruit juices to all the delegates.

Ms Neena Gill CBE MEP spoke of her visits to India’s and felt the effects lasted for a long time after receiving Ayurveda treatments. It’s important that the benefits are recognized across Europe in that they are cost saving and healthy she said. Parliamentarians Dinesh Dhamija Head of EU-India Delegation and Jo Linen echoed similar visions on the benefits of ‘prevention is better than cure’ approach to wellness.

Dr Tony Nader and Dr Nagendra presented their speeches via Skype and addressed Ayurveda being the science of life and immortality not just at physical level, also on the mental level and most profoundly on our human reality being the value of consciousness.

Gita Desai participated from United States of America exhibiting a trailer on her new documentary of a 5-hour Ayurveda Unveiled and spoke briefly on the benefits of accepting everyday should be an Ayurveda day.

Dr Martina Ziskova from Czech Republic, Durlabh Vasudeva from France, Gayatri Puranik and Dr Peter Kath from Germany, Dr Partap Singh Chauhan from India spoke on the benefits of incorporating Ayurveda into the national health systems of Europe along with Ragasudha Vinjamuri from UK who performed a Dance of Ayurveda.